What are contexts and how are they used?

A context is a powerful tool that can help to create sophisticated voice interaction scenarios. In this post we’ll look at how you can use contexts to build dialogs.

When a dialog is created, it’s usually the case that many branches of conversation are possible. Therefore, intents in an agent should be designed so that they follow each other in the correct order during a conversation.

The best way to demonstrate how this works is to build a conversation together, step-by-step. As an example, we’re going to create an agent for a floral shop. You can download it here and try the instructions in your account.

First, let’s take a quick look at how contexts operate.

To add a context, just type its name into the field and press enter. The context will now appear as a box with a colored border.

Here we’ve set an output context for our floral shop named ‘compose’. Once this intent is matched, the context ‘compose’ will be set. So any intents that have this as an incoming context will now have top priority when matching user requests. Note that these intents will not be matched if the context is not set.

All contexts have a very important property – lifespan.

By default the lifespan value is set to five. It means that the context will last for the next five matched intents. So if you have different input/output contexts in each of the following intents, all of them will be collected in the next five stages of the dialog, like a chain of contexts.

While this feature can be very useful, at times you may want to get rid of a context after the following intent is reached. In these situations you can simply change the lifespan to one.

Now we’re ready to design the dialog we want our agent to produce. The best way to do this is to draw a scheme like the one pictured below. You can use Lucidchart for this. 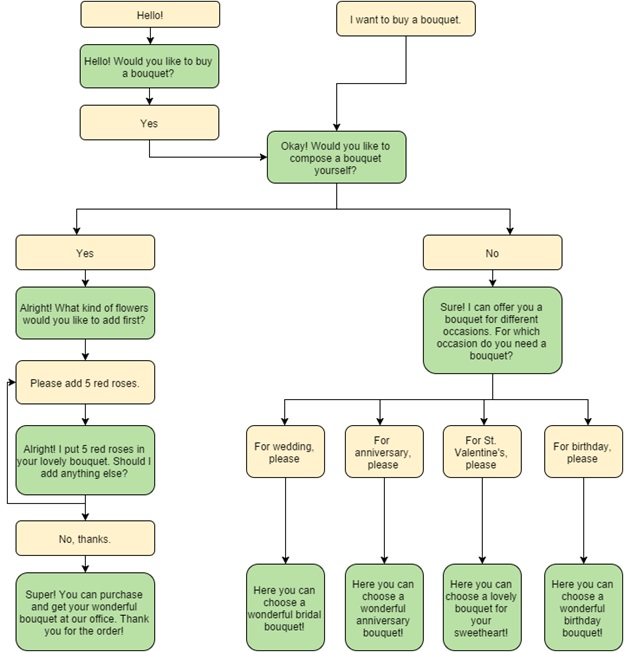 From this scheme we can see that there are two main branches of the conversation. The first is for people who want to compose a bouquet themselves; the second provides the option to choose from one of four pre-made bouquets.

In order to manage these two branches of the conversation we’ll have to set different contexts.

The intent where fulfillment is ‘Okay! Would you like to compose a bouquet yourself?’, looks exactly as it was shown above: its name is ‘compose’ and it has an output context ‘compose’.

So we’ll have to create two different intents to match the possible answers. We’ll make one for ‘yes’:

This same logic applies along the whole dialog structure. Whenever you need to go further to a specific intent, you should set the corresponding contexts. This is especially important when you have multiple ‘yes/no’ answers in the conversation.

The other important function of the context is its ability to collect the parameters’ values. In our example, we’re collecting information during the dialog so we know by the end how to fill the customer’s order – how many flowers of what kind and what color we should add, or alternately, which pre-made bouquet we should choose. As long as a certain context is still alive (i.e., within its lifespan) the value we get from a parameter (if it was set in a context) is also alive.

In order to collect all the values at the end, we just have to set one context, which will appear in every intent, both input and output (except for the very first intent, where we set the output context only).

We just have to slightly modify what we see in the screenshots above:

To retrieve the parameters from the context, write: #context_name.parameter_value:

Then in the dialog those values will look the same as always: 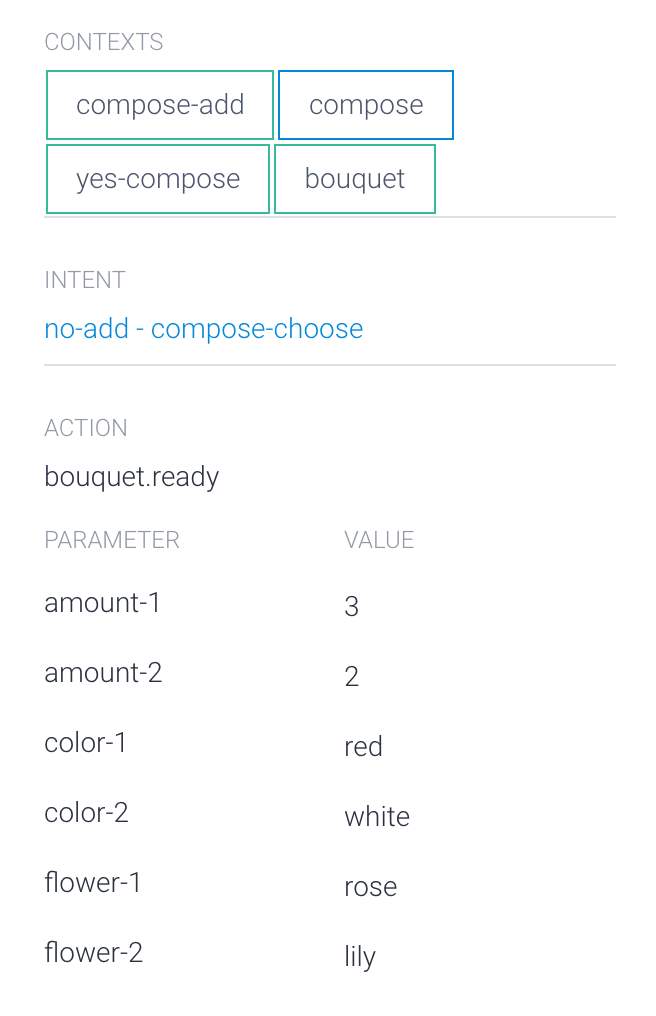 Feel free to play around with this example. You can download the agent here.

Welcome to the Dialogflow blog. Subscribe to get product updates, best practices, and tutorials directly in your inbox.